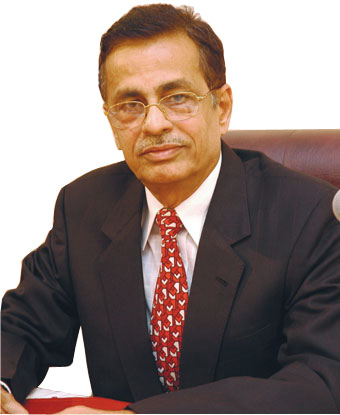 "My aim is to transform Society through education by setting up academic institutions in dynamic equilibrium with its social, ecological and economic environment striving continuously for excellence in education, research and technological service to the nation"

Shri Dr. CA A. Raghavendra Rao established the A. Shama Rao Foundation to achieve his stated aim of transforming society through quality education which will be in harmony with the social, economic and ecological environment. This firm belief was the driving force which created the Srinivas Group of Colleges under the umbrella of A. Shama Rao Foundation. Shri. CA A. Raghavendra Rao has a unique and focused approach towards life. He dons different hats in his service to the cause of ‘Nation Building”. He is successful Chartered Accountant with offices in Seven cities across India, he is a hotelier par excellence who has created one of the first and finest 3 –Star hotel with a vegetarian restaurant as its hallmark. His most notable contribution has been in moulding the careers of thousands of students through a chain of colleges imparting professional education in such varied fields as Engineering, Medicine, Physiotherapy, Hotel Management, Business Management, Computer application, Nursing and Pharmacy. His dedication and excellence in his field makes him a completely reliable person and hence he has set an example to his clients, staff, students and admirers.

Shri Dr. CA A. Raghavendra Rao was born in Benagal, Pejamangore Village, Udupi on 16th October 1937 to Late Shri. A. Shama Rao, (Retd. Headmaster, BEM Higher Secondary P.U College, Car Street, Mangalore) and Smt. A. Indiramma. He completed his elementary education in SVS Elementary School, Innanje and then joined the SVH High School. He completed his intermediate examinations as well as graduation in Commerce at the M.G.M. College in Udupi and came to Mangalore to pursue his higher education in Chartered Accountancy. In the year 1965, he set up his independent practice as a Chartered Accountant at Felix Pai Bazar, Mangalore.

Having started his practice with a single staff in his office, today there are 75 employees working under the CA firm M/s Raghavendra Rao Chartered Accountants, Mangalore and has offices at seven cities spread across the country. Today he is universally acknowledged as one of the senior most professionals amongst the fraternity of Chartered Accountants. In 1979, he contested for the South India Regional Council (S.I.R.C) of Institute of Chartered Accountants in Chennai and won the election. During his four-year tenure, he served as the Chairman of the India regional Chartered Accountant Students Association at Chennai and also as Secretary of S.I.R.C for some time. During this time, he was the taxation committee Chairman of the S.I.R.C and conducted regional taxation seminars at Mangalore. Not one to rest on his laurels, his innate talent as an entrepreneur saw him enter the hospitality industry with “Hotel Srinivas” in 1980. The Hotel has the unique distinction of being one of the first hotels to be classified as a 3-Star hotel despite the fact that it had a multi-cuisine vegetarian restaurant while the trend internationally was to attach a Non-Vegetarian restaurant to any star category hotel.

In the year 1988, he set up the “A. Shama Rao Foundation” a trust dedicated to advancement of his belief that “Education is the prime driver in transforming Society”. He found strong support for his vision from the then Vice-Chancellor of Mangalore University, Prof. Shafiullah under whose able guidance and encouragement Shri Dr. CA A. Raghavendra Rao set up the first professional degree college under the aegis of A. Shama Rao Foundation, Mangalore. The college named “Srinivas Institute of Hotel Management” offered a 3-year Bachelor’s Degree in Hotel Management. From modest beginnings, the college as well as the foundation has grown many times over. Today the sixteen colleges of the foundation offer more than 78 programmes in various fields of study.

Work hard and build up a constructive thinking for future generations. People should be good to one another. We have to keep everyone happy, and there should be no room for jealousy among our brethren. We have to try to lift up someone and not to pull them down. We have to think of others prosperity and not disparity