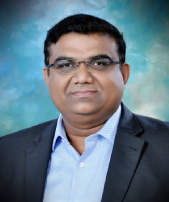 The Registrar (Development) of Srinivas University, Prof. Dr. Ajay, is a Professor in the department of Physiotherapy. Having completed his graduation in Physiotherapy followed by his Post-graduation MPT in Orthopedics, he finished a Diploma in Yoga Therapy (DYT). Continuing his further studies, he ventured into the field of management by achieving his Post Graduation in Management (PGDM). He started his career as a lecturer in Srinivas College of Physiotherapy in the year 2001. Promotions soon followed as an Assistant Professor and later as a Professor.

During his professional career, he has dedicated his services to Rajiv Gandhi University of Health Sciences, Bangalore as a member of the LIC committee, Academic Council & Board of Studies. In the field of research in orthopedics specialty, he has guided several Post-Graduate students. He has also been deputed as an examiner for undergraduate and postgraduate courses under Rajiv Gandhi University to different colleges in Karnataka.

Having a rich academic and administration experience, he has served for several years as the Public Relations Officer of Srinivas Group of Colleges. Meeting new people, building up and maintaining Public relations is his passion. As an educationalist, he has deployed his knowledge towards analysis, synthesis and fine tuning of the organization and was tasked with the responsibility to suit the dictates of the given environment.

As an astute professional with years of teaching and administrative experience in higher education, being well-versed with the field, concepts and practices, holding key areas of interest in administration, he is responsible for development of different Professional higher education courses and colleges at the University Level.

He has an experience of maintaining research oriented training programmes and guidelines that includes developing new courses, Ordinance regulation, its function and statutes for the university.

He maintains a unique leadership style and motivation that brings out the best in the team for achieving organizational objectives through recruitment, human resource screening, interviewing, selection and training faculties for professional colleges in their area of specialization.